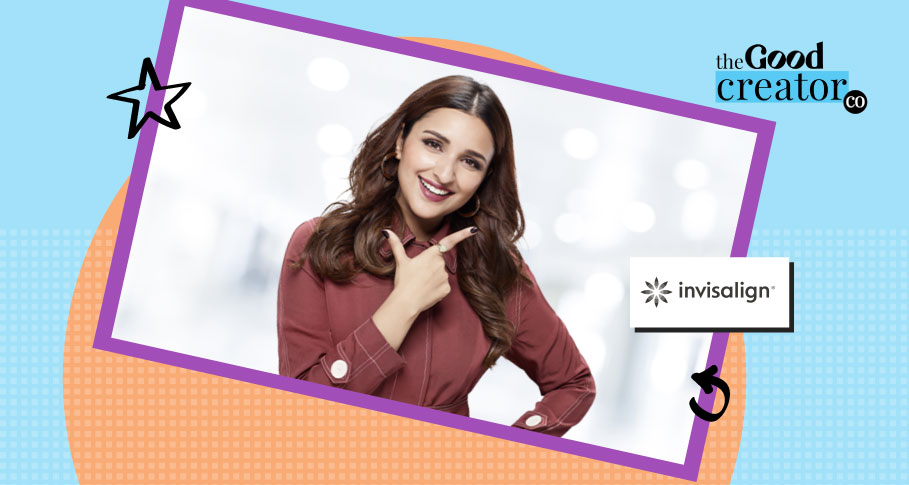 Invisalign has created a name for itself as a clear and hygienic alternative to braces while keeping the process comfortable and the outcome nearly invisible, thus appealing to potential customers’ aesthetics and pain points.

Objective: Generate awareness about Invisalign treatment as an alternative to braces.

Braces have been the option for fixing dental problems for ages, but their unappealing aesthetics and need for abstinence from food are the two primary reasons people shy away from them.

So for this campaign, the brand wanted The Good Creator Co. to create a detailed video vlog to make the audience aware of the Invisalign System and how it is a proven hygienic orthodontic treatment one can choose.

Strategy: Using the influencer’s personal experience with braces to highlight the product’s use

The Good Creator Co. advised Invisalign to rope in the influencer, Aanam Chashmawala who’s had braces herself in the past thus bringing connectivity and relatability to the video. Her vlog captured the entire process starting from Aanam discovering the product on the internet, locating the clinic on the brand’s website, followed by booking an appointment with Dr Milind Darda who is a certified Invisalign provider. The video showcased her overall consultation experience along with the doctor clarifying some myths about the process.

The aim was to position Invisalign as a clear and alternative solution to braces throughout the campaign. The content was further amplified on The Good Creator Co. platforms thus reaching out to a wider audience. Since the video was very informative, it did get the audience intrigued about the process. The influencer received a lot of queries from her audience about the entire Invisalign process.

The fact that Aanam had braces herself in the past worked extremely well for the video as she added the real-life problems that she had to go through while having braces. This helped the campaign strike a chord with the target audience as they perceived Invisalign as a solution to all the struggles that come along with braces.

Influencer marketing has the potential of connecting your brand with millions. With the right strategy and execution, you can launch your next viral campaign too. How? Get in touch and we’ll help you out!